ORC in the Time of the Virus
This spring many Ocean Reef resident Members, who usually depart after Easter, chose to stay later. The “shut-down” of the Club offered a temporary safe option for avoiding the Corona crisis.

Then, about the middle of June visions of neglected gardens in Kentucky or cool nights in Michigan spurred Members to make travel plans a priority.

Commercial flights were risky, so private jets became a “price is no object” option. Some Members with similar destinations arranged to fly together.

Others of us like my husband Arthur and I decided to forfeit travel altogether. And instead of fleeing to our summer home in Cape May, New Jersey we opted to stay safe (we hope) at Ocean Reef.

A couple of times a week Arthur cooks at home (I’m a seriously challenged chef). Other nights we do take-out from Gianni or dine outdoors at restaurants, like the Islander and others that have a screened porch.

We often hook up with one or another couple of the summer’s surviving Equity Members. We’ve made some new friends and become a lot closer to former acquaintances.

And, in case I forget to mention it, we wear masks wherever, whenever. I have an assortment so that I can accessorize any outfit in my wardrobe.

Hurrah for the Harringtons!
Except for wearing a mask and social distancing, most of us feel pretty helpless to do anything that might ultimately defeat COVID19.

That makes us especially appreciative of Ocean Reef Club Members Ron & Nancy Harrington, who in 2012 made a catalytic gift of $50 million to establish the Harrington Discovery Institute (HDI).

Recently HDI joined in the fight against COVID19. The Harrington Discovery Institute paired with Morgan Stanley’s GIFT Cures to finance an innovative international program to provide private funding to selected physicians and scientists working independently in the search for the development of anti-viral therapies that would control COVID19.

Centered at University Hospitals Case Medical Center in Cleveland (near the Harringtons’ hometown of Hudson), HDI issued a call for proposals that brought hundreds of applications from physicians and scientists at 122 universities and health systems across the US, Canada and the UK.

In June, Harrington Discovery Institute announced the first 12 award winners, each of whom is eligible to receive one million dollars to further his or her project in clinical trials.

Projects were required to focus on the following areas: preventing death from the virus; providing anti-viral drugs that promote a faster cure in an infected patient or offer some immediate protection to first responders and emergency medical personnel; vaccines or alternative therapy for the current crisis and for the future.

Ron and Nancy Harrington know full well that HDI’s fundraising work has just begun. In addition to the 12 chosen this year from the hundreds of applications, there are said to be at least 50 others with promising discoveries that could help avert the pandemic. But this is a hopeful start. And with hope and resources there’s a chance.

So, thank you, Ron, Nancy and your children for making a significant bet on our future. 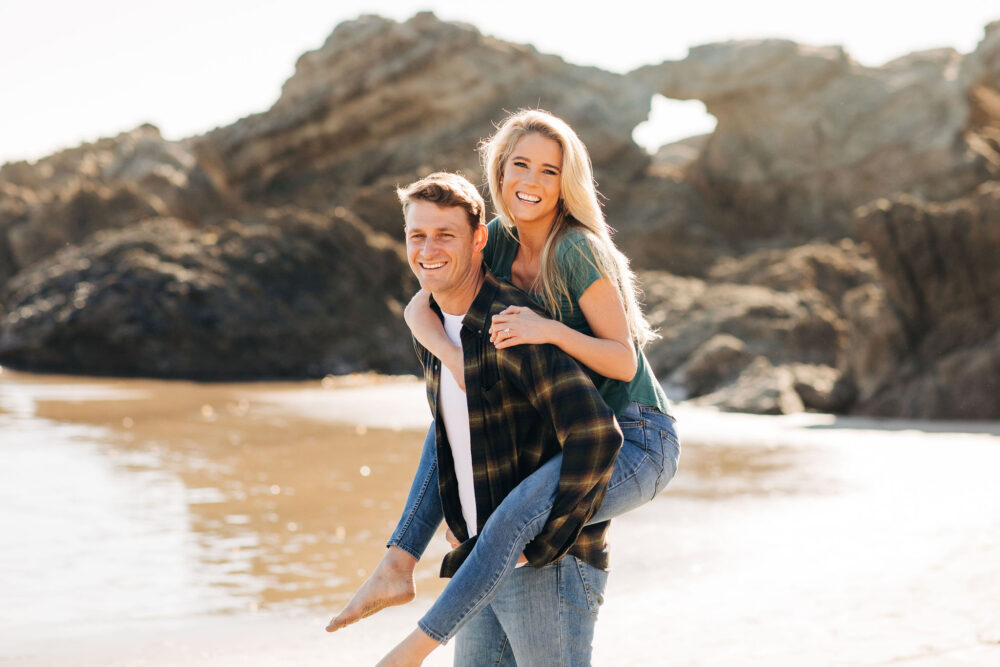 The Best of Weddings!
On June 7, Cassidy Gifford married Ben Wierda. Cassidy is the daughter of Kathie Lee & Frank Gifford (dec.). Ben Wierda is the son of Emilie & Craig Wierda. Both sets of parents are long-time Members of Ocean Reef Club.

The wedding, a small private ceremony in the backyard of the Wierda family farm in Holland, MI was not exactly what the young couple originally had in mind.

For months Ben and Cassidy had been preparing for a beautiful event to take place on June 13 at a luxurious ranch in Santa Barbara. The caterer was at the ready. The flowers were ordered. The 250 invited guests had confirmed their reservations at the Four Seasons Hotel. Cassidy’s dress had arrived.

Then COVID19 struck big time in California and the only thing Ben and Cassidy could salvage from their elaborate plans was the most important thing, the marriage.

So, they did what so many other couples have had to do in this era of the pandemic, they improvised.

The guest list was limited to 20 and included only family members and three close friends.

The Wierdas have a beautiful farm and their house has a back porch that overlooks an orchard. Thus, a perfect setting.

Ben’s sister, Annie Wierda, a talented amateur chef who trained at the International Culinary Center in NYC, prepared all the food, including Ben’s favorite tiramisu cake.

The backyard was decorated with white flowers and an impromptu chapel was assembled with garden benches and a pergola.

A favorite minister, who 4 years ago had led a trip to Israel for Ben and Cassidy and their families, was engaged to perform the service.

For Kathie Lee and Em it was a shared pleasure to sit side by side on a garden bench and watch Ben and Cassidy exchange vows.

Both moms, close friends for many years, recalled how more than 15 years ago Cassidy had a crush on Ben. She was 11 and he was 14 and they were always looking to be together while at Ocean Reef.

At the end of the evening Kathie Lee sang a song to accompany the barefoot newlyweds’ first dance on the expansive green lawn.

“This was the perfect wedding,” exclaimed Cassidy. 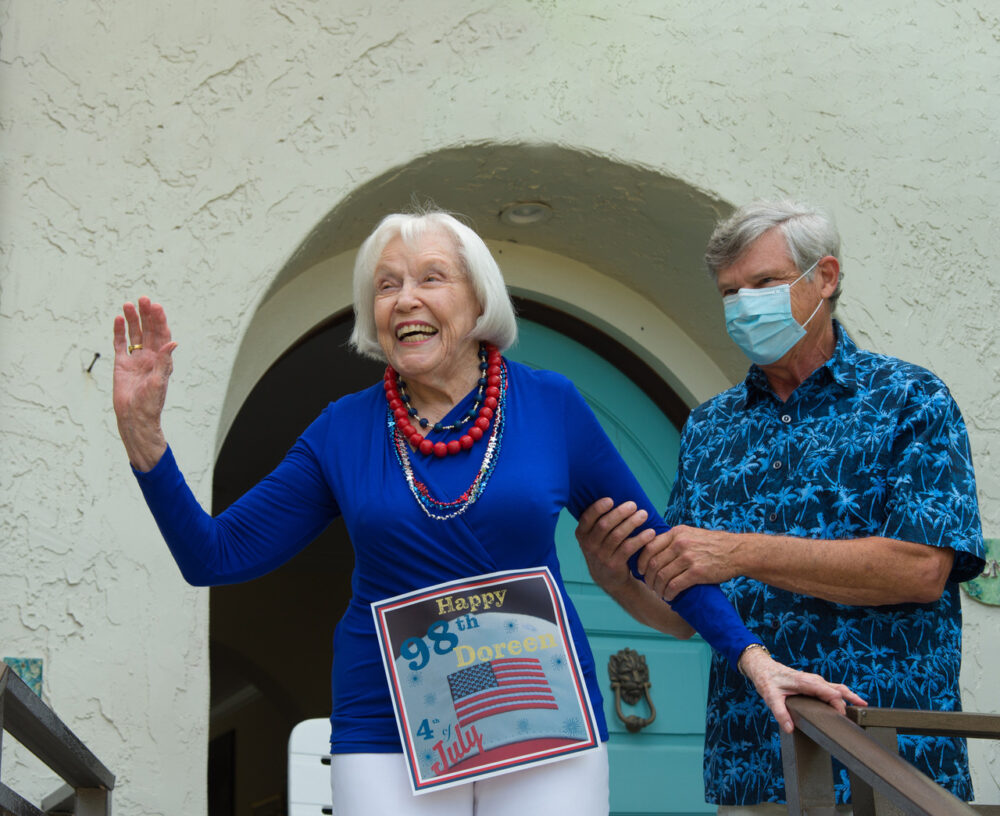 Unforgettable Cart Drive-by
On July 4th a small parade of Members, appropriately dressed in red, white and blue, hopped into their golf carts and “drove by” the Ocean Reef home of their friend Doreen Johnson.

Doreen, like her country, was celebrating a birthday. The United States was 244 years old. Doreen was 98.

In “normal times” (remember those) there would have been a party and this little group of friends would probably be toasting the “birthday girl” with a glass of bubbly and reminiscing about boat trips, tennis and bridge games, countless social occasions they shared in years past with Doreen and her late husband Ed.

But what to do? This is 2020, the year of Social Distancing, not Social Gathering.

Ann Lampman, who is my vision of the “Auntie Mame of Ocean Reef”, happens to be Doreen’s bff (text talk for “best friend forever”).

It was Ann who had the idea of adopting the new Ocean Reef tradition of a Cart Drive-by, used by Members as a safe way to show you care. (Note: In addition to marking a happy milestone, like a birthday or anniversary, a Cart Drive-by has by necessity sometimes replaced a memorial service.)

It was Ann who enlisted other of Doreen’s friends to join the parade. And it was Ann who dressed as “Lady Liberty” and appropriately decorated her cart.

A “Cart Drive-by” presents no problem with Social Distancing. If you choose to stay in your cart, you can wave, blow kisses, shout out Best Wishes. “It beats all that Zooming and Facetime,” said one Member, who heartily approves of the Drive-by. “It’s personal. You are there in person.”

And so they were. They were there “in person”, albeit in their carts, to give Doreen Johnson a delightful surprise on her 98th Birthday. And because of the wonderful photographs by Carol Ellis, this birthday will truly be unforgettable.

Note: Carol Ellis lives and works at Ocean Reef. Over many years she has captured images of every aspect of our Club and Community, whether it be a huge All Charities event or this small drive-by birthday celebration.

Carol is a true professional with a keen eye, enhanced by artistic sensibility. In the pictures that appear here just look at how she has caught the exuberance of Ann Lampman as “Lady Liberty” and the sheer delight and surprise on Doreen Johnson’s face. Unforgettable!