In the nearly 15 years I’ve been writing for the Ocean Reef Press I’ve covered the “doings” of a whole lot of my fellow ORC Equity Members. Most of us are in residence at OR from November until after Easter when we exit Key Largo for various cooler getaways.

This past “Covid Summer” my husband Arthur and I, fearful of the risk of travel, broke the pattern and stayed on at Ocean Reef. One consequence of this decision was that I found time to tackle a long delayed project – the sorting and filing of some of my past Ocean Reef Press articles. It took longer than it should have because I constantly stopped everything to reflect on Members’ disclosures of unusual backgrounds, surprising risk-taking, committed avocations, life-affirming relationships.

What follows are short excerpts from just a few of the many stories that convinced me that the Ocean Reef Club Members are a truly extraordinary group.

SEAFARERS…
Three adventurous Ocean Reef Members who at some point in their lives joyfully succumbed to the lure of the sea. 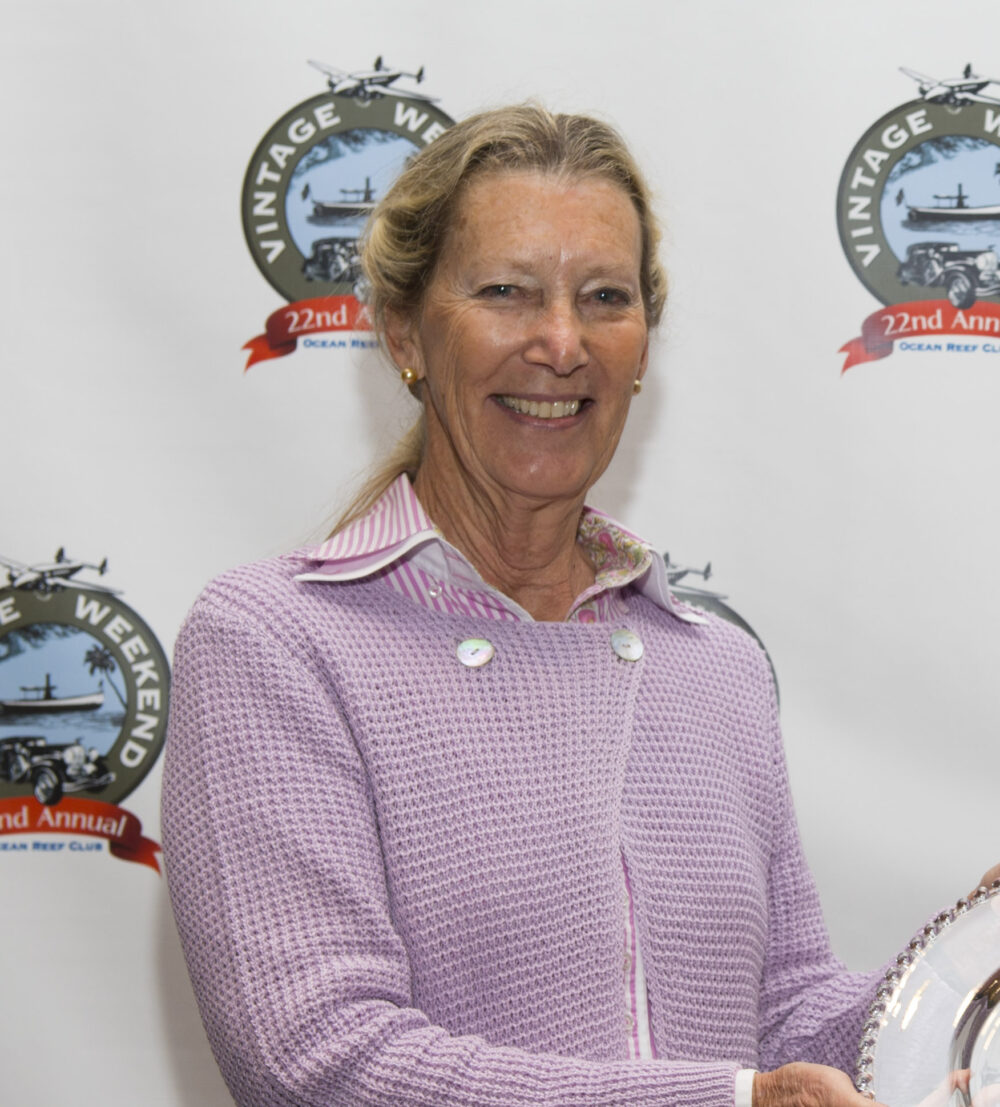 An Ohio girl, Vicki Goldstein (pictured above) had her initial experience with boats in her early 20’s when she embarked on a five-year sailing trip around the world with her first husband. When the trip ended, Vicki continued to be involved with boats – she wrote about them in sailing magazines; sold them at a yacht brokerage; and when she married Alan Goldstein, she raced with him in Maine for 30 years in their restored 1907 sailboat.

In 1981 Jim Leenhouts took a sabbatical from his high-powered job at Dow Chemical and sailed halfway around the world with his wife Marg and their two children. It was before GPS and he had to rely on a sexton for navigation.

An avid fisherman, Paul DiMaura left his Boston real estate business in 1978 to spend 3 years as a fishing guide in Islamorada. The rewards were not financial (a $50 tip was a good day) but he enjoyed his clients, treasured his independence and has memories of hooking a 16 lb. bonefish that set a FL record.

BIRDMAN…
One of my favorite interviews was with Harold Brewer, who documented or photographed 828 species of birds. His glorious photographs of Florida birds appear frequently in the Ocean Reef Press. 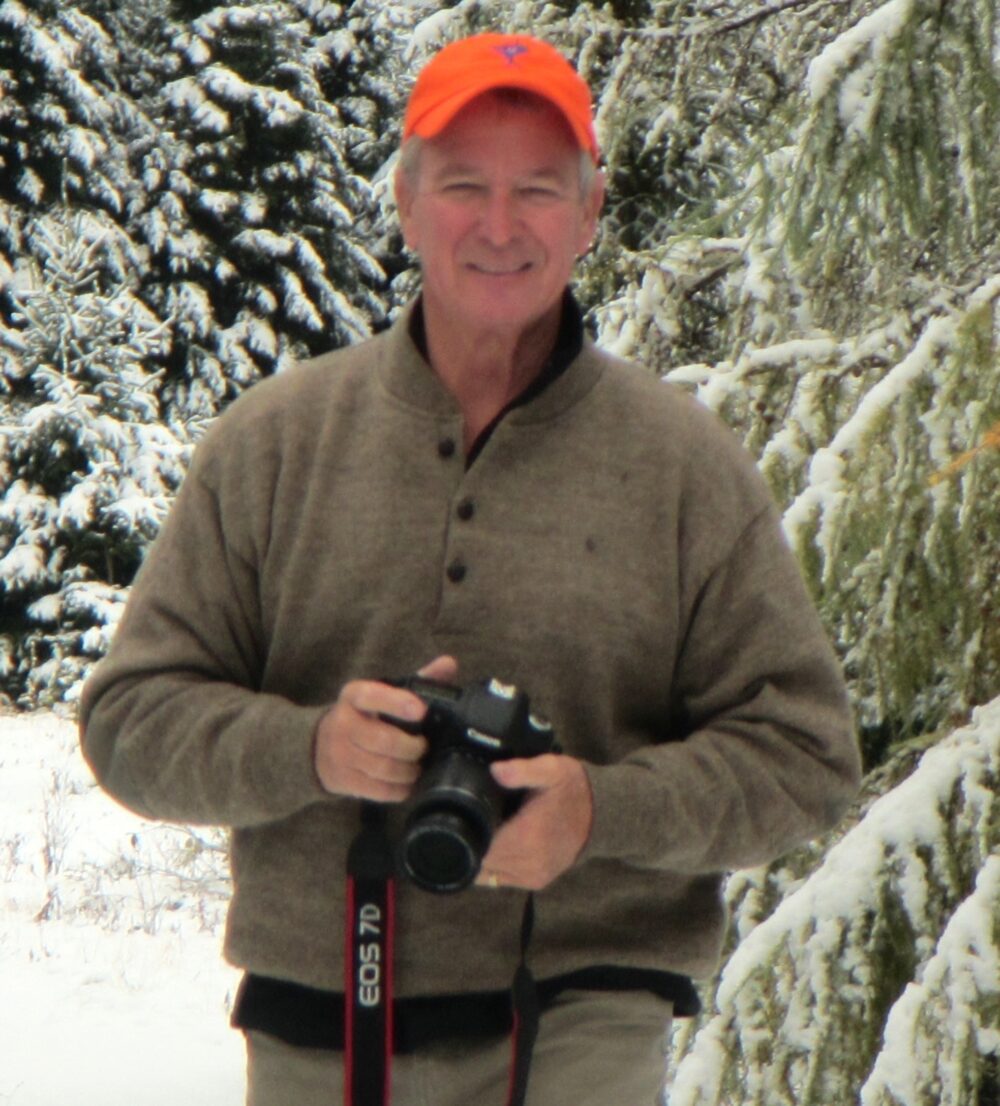 Harold Brewer (pictured above) had an interesting career as an innovator and entrepreneur in the world of banking. His passion for bird watching began in his 20’s when he was involved in setting up a private hunting club on a 25,000-acre plantation near Athens, Georgia….The club’s membership included several PhD’s from the U. of Georgia. “They knew every insect, plant, animal and bird. They taught me to not just look but to observe.”…. Previously a hunter, Harold found his prospective had now changed. “The only shooting I wanted to do was with my camera.”

ORC LOVE STORIES…
Top of my list of favorite articles are the stories of how two couples Marlene & John Boll and Sandy & Kevin Crowe found love. Albeit the Boll’s romance began in 1952 and the Crowe’s in 2017.

When John & Marlene Boll met, John was a 20- year-old corporal in the army and Marlene was an 18-year-old dancer with the Radio City Music Hall Rockettes, whose synchronized kicks were world famous.

Whenever John could get to New York, he was in the front row at Radio City. “I always waved a white handkerchief so Marlene would know I was there.” When John confessed 3 years later that he was not the affluent medical student he had claimed to be on their first meeting, but a small town builder with only a high school education, Marlene forgave his ruse and agreed to marry him. Note: the “small time builder” went on to become a pioneer in developing top of the line manufactured home communities…. 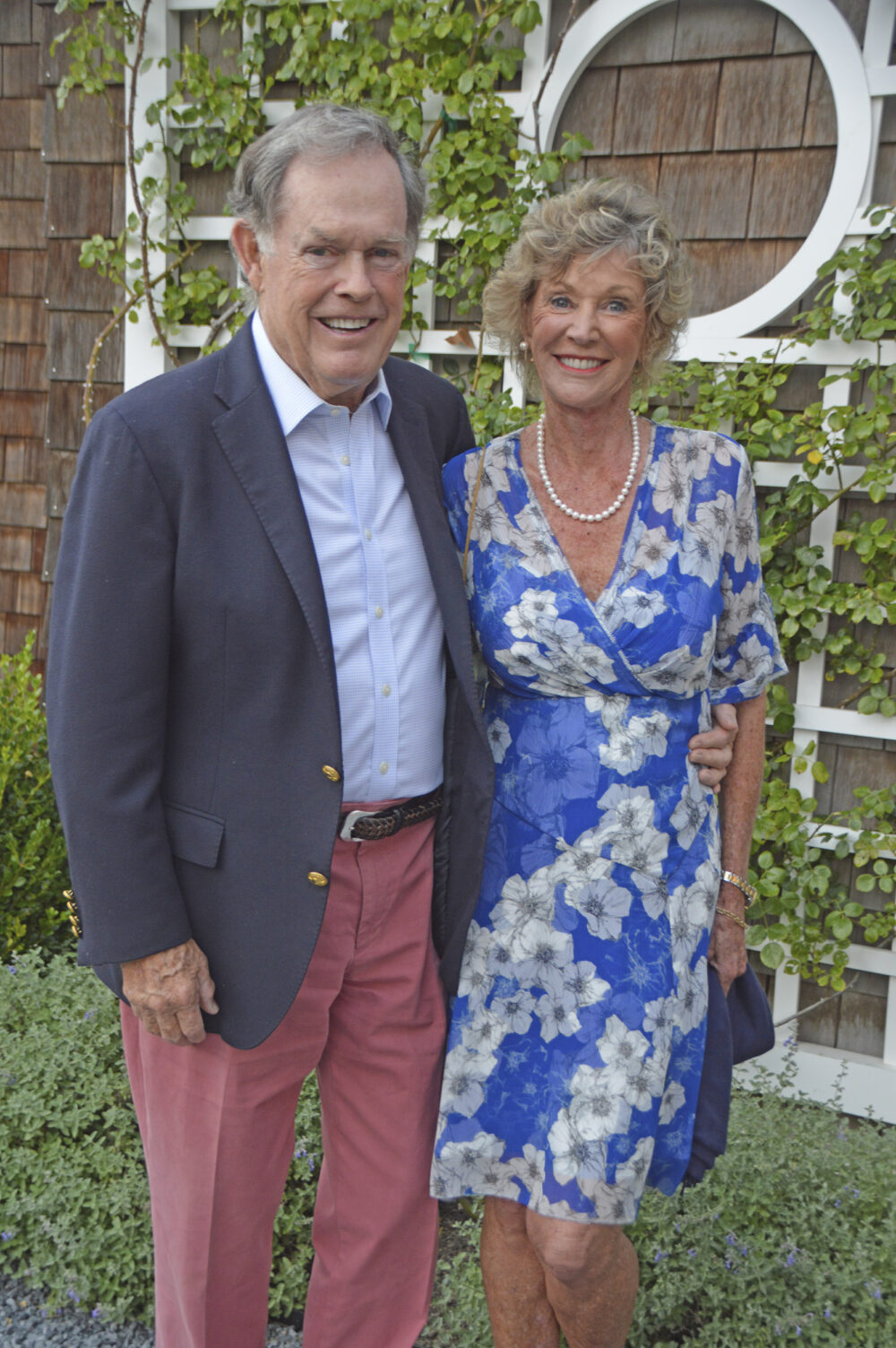 Though both Sandy Rule and Kevin Crowe (pictured above) had been Ocean Reef Club Members for decades, surprisingly they had never met. Three years before they each had experienced the heartbreaking loss of a longtime spouse. Neither expected much to come of the blind date set up by Kevin’s tennis partner….But dinner at Gianni stretched into six-hours of revelations of all the life experiences, interests and goals they shared. Five weeks later Kevin arrived at Sandy’s house with a stack of travel brochures and said, “We’re going on a trip. You decide where.” Sandy chose the National Geographic’s Round the World Private Jet Tour. No surprise that it was Kevin’s first choice as well. Happy ending: a great trip and a great wedding with a loving extended family and friends cheering them on.

CELEBRITY CHOICE…
Kathy Lee Gifford, an Equity Member for over two decades, is currently living in Nashville, where she is writing musicals and producing and actin in films. In years past she and her late husband Frank Gifford and their two children Cody and Cassidy frequently spent holidays and vacations at their OR home. Kathie Lee now has another connection to Ocean Reef – early this summer her daughter Cassidy married Ben Wierda, son of OR Members Emilie & Craig Wierda. The excerpt below is from an interview I did with Kathie Lee a number of years ago. 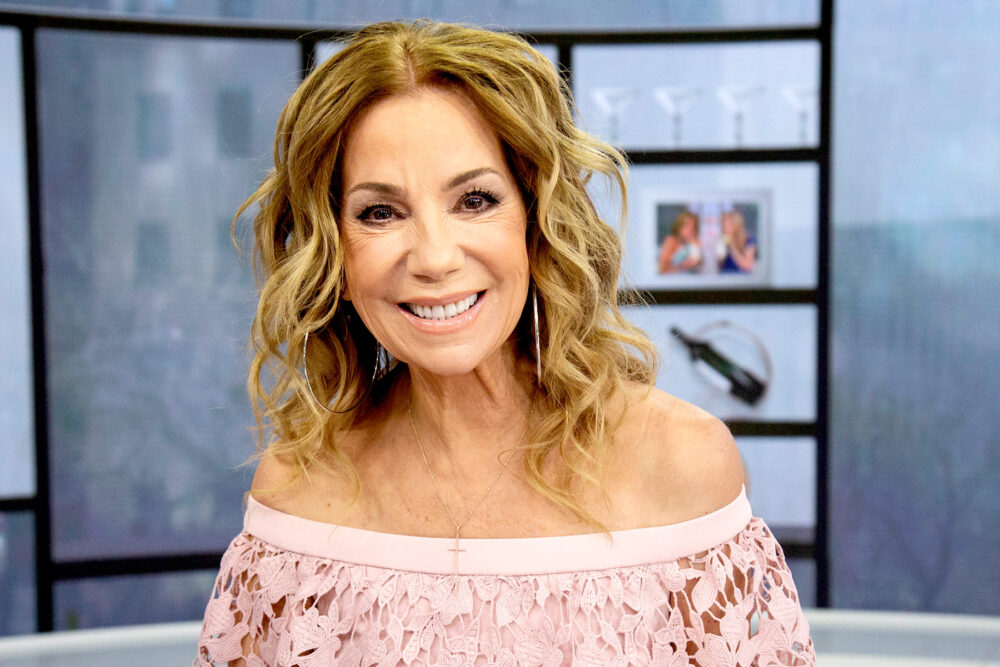 For some OR Members Kathie Lee Gifford (pictured above) is more than a celebrity. She is a friend and neighbor. Kathie found in Ocean Reef “a beautiful community” for her whole family. “We’ve made lifetime friendships. Our children have grown up like normal kids playing with normal kids. People respect our privacy. Ocean Reef has been a refuge, a place to unwind.”

UNUSUAL HOBBY…
Marilyn List collects Tea Caddies (not to be confused with Tea Cozies, those little skirts you put on the kettle to keep the tea warm). Marilyn’s Tea Caddies are the elaborate containers that were used to store tea in the fine houses of Europe and England in the 19th Century….That’s part of what I learned from writing about Marilyn’s unusual hobby. I also found out that I was wrong about “High Tea”. 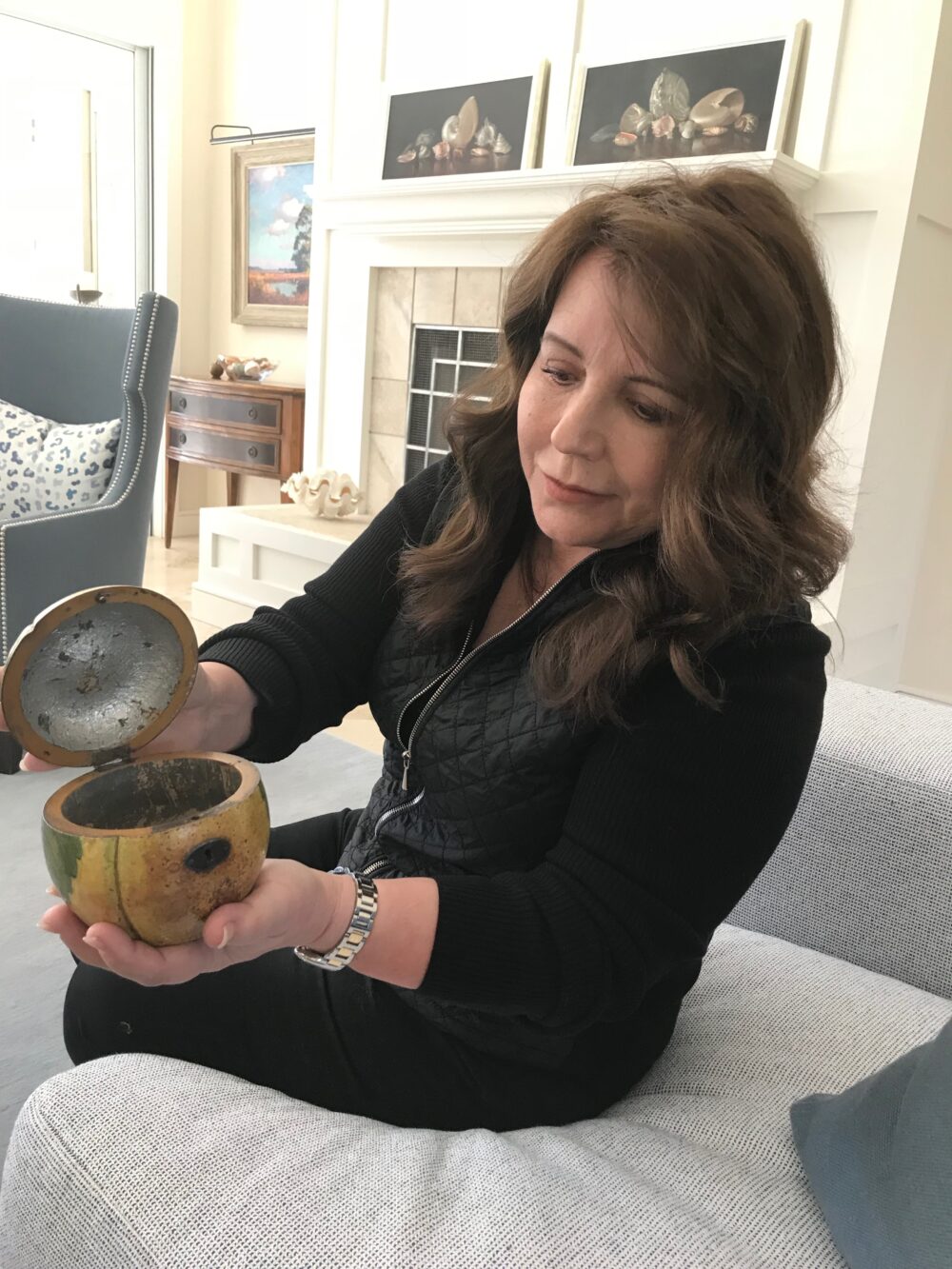 Marilyn List (pictured above) explained that most Americans believe High Tea is a posh affair with a silver teapot and fine Wedgwood platters of dainty watercress sandwiches. Wrong! High Tea was a working man’s dinner and it was called High Tea because it was eaten at a trestle table by tired laborers perched on high stools. 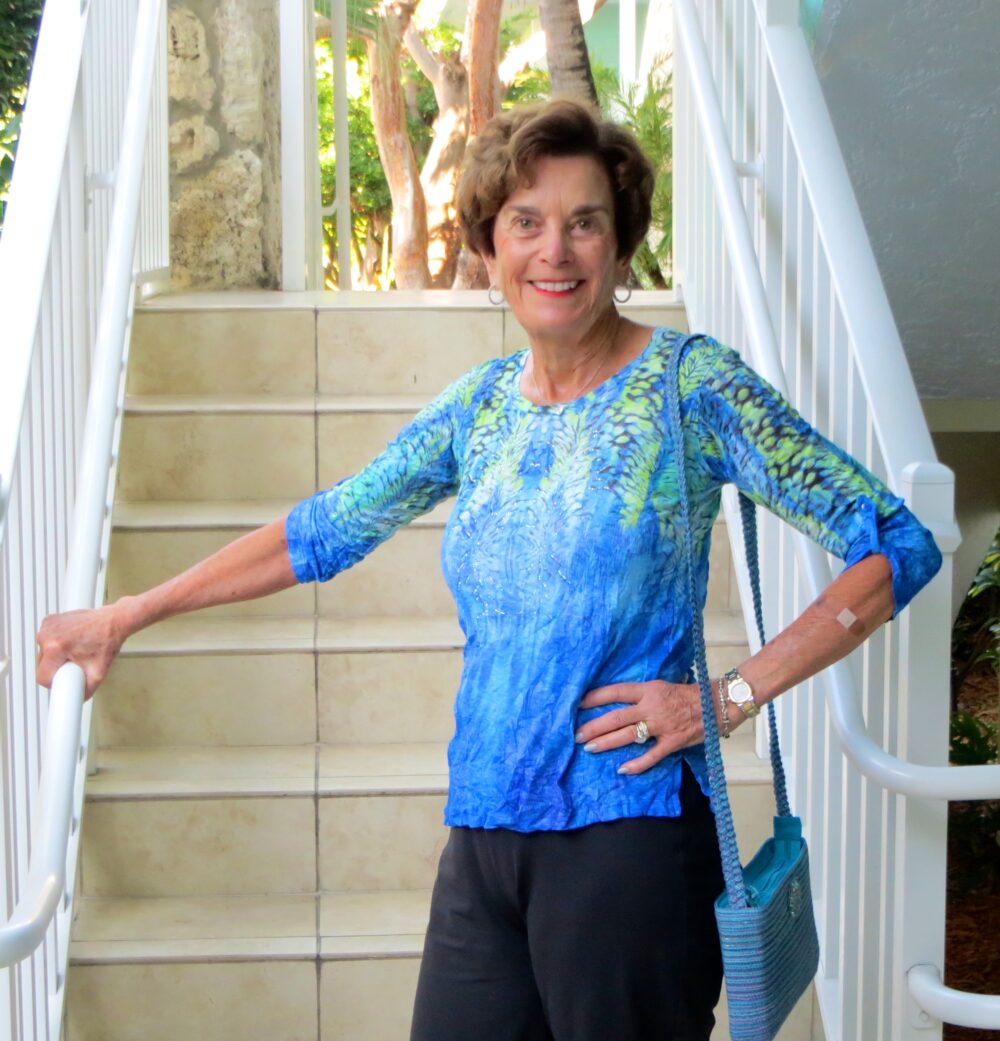 Over the years Connie Taylor ( pictured above) fostered 15 newborns, most of them for 2 to 6 weeks, a few stayed with the Taylor’s for several months….Although that added up to a lot of 2 a.m. feedings, Connie believes her whole family benefited from sharing their home with these babies.

POLITICS ON THE Q.T…
Claudine Baker was born in France, her family fled the Nazi occupation when she was five and eventually made their way to NYC, the place she still calls home. Claudine and her husband Fred discovered Ocean Reef in 1985 when they drifted by in their boat and “it looked so beautiful that we thought we’d give it a try.”

Claudine Baker is an unabashed Democrat. She was the chairman and guiding force behind the preservation of Eleanor Roosevelt’s cherished cottage Val-Kill in Hyde Park, N.Y. She was a delegate to the Florida State Convention when Bill Clinton was seeking to run for president and she was a strong supporter of Hillary’s and Biden’s campaigns. At Ocean Reef, where there aren’t many Democrats, Claudine contends she has no problem. “I wear my politics on my sleeve and I often get some fond teasing about that. But then, most OR residents subscribe to the axion that politics and religion should not be discussed at the dinner table. Of course, that applies only to National politics. Ocean Reef politics are always fair game.”