by Sarah A. Cart

C (short for “Cynthia”) Koconis has been a familiar and beloved face at The Spa at Ocean Reef ever since being hired as its first massage therapist. But this was not her first career. 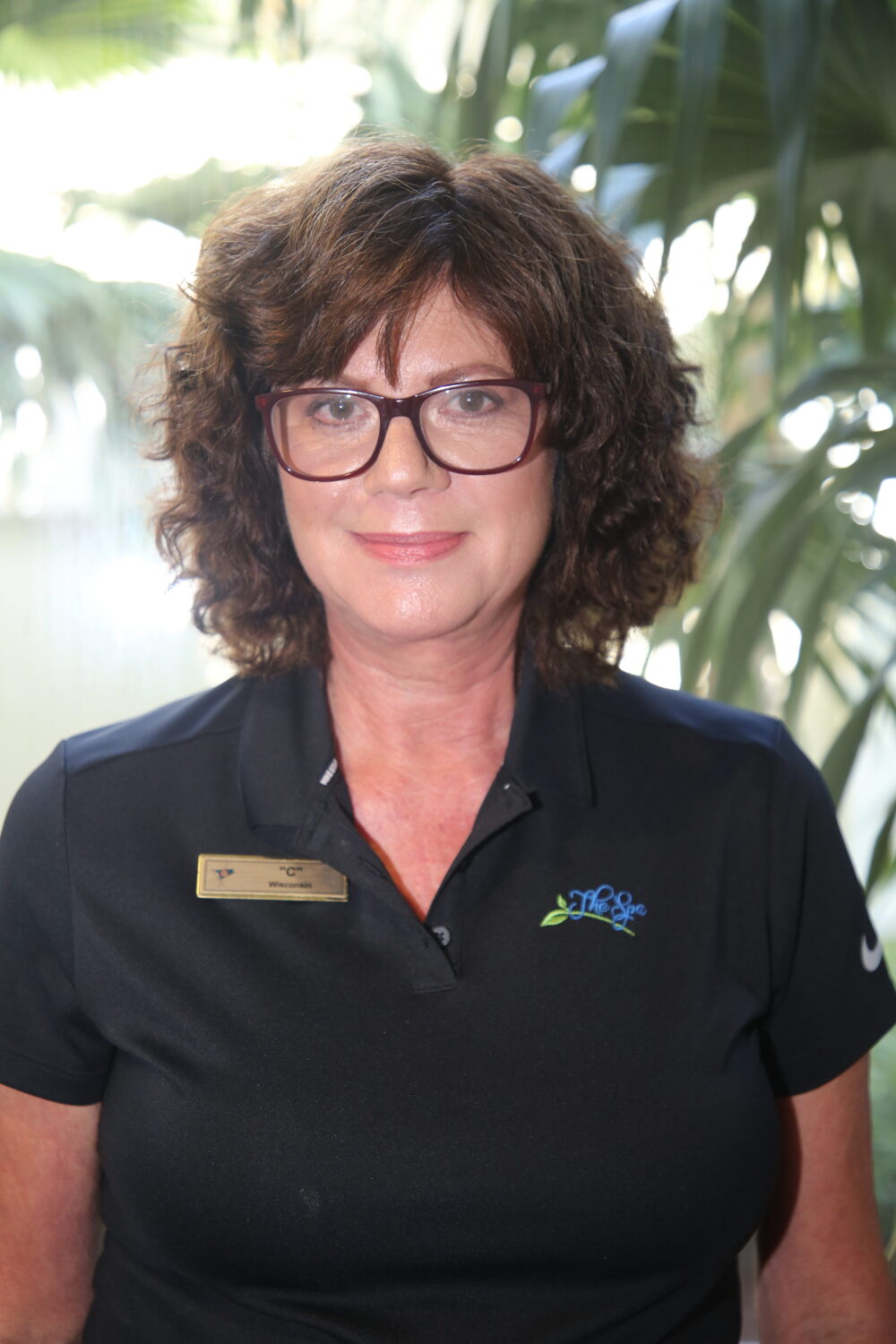 A native of Green Bay, WI, C was raised by a single mom, an ER nurse. Her Great Aunt Laura lived with them and taught C to cook and gave her massages. In turn, C would massage her mom’s feet (“So you see, I came to it early.”) Each summer, C headed to another aunt and uncle’s farm to work and play and learn (“even how to make sausage”).

“I was an odd kid,” dissecting frogs with tools her mom brought home from work and reading her mom’s nursing books rather than teen magazines. By age 16, C was completing high school courses at UWGB (“It was just easier for everybody …”) and soon “became a hippie.”

She headed to Maui to study marine biology at the University of Hawaii, earning money to get through school by managing an Italian restaurant owned by Hollywood producer Shep Gordon and frequented by the rich and famous. But she wasn’t ready to put down roots so she cycled between Hawaii, Wisconsin and Florida over a couple decades, with an entertaining Massachusetts summer thrown in.

While C was working for the Humane Society in Cocoa Beach in the early 70s, her boss suggested she apply for a position through the Job Corps. Thanks to his recommendation, she became Florida’s first female animal control officer, wrangling myriad critters from alligators to diamondbacks and wielding regular rifles, 30-06s and tranquilizer guns. When that became old, she moved on.

One winter she crewed aboard the Jocelyn C, a commercial fishing boat out of Cape Canaveral. She also served as the boat’s cook, preparing meals for five guys on a two-burner stove, and occasionally sitting in a Piper Cub to help with the catch by spotting swordfish from above.

When the season ended, C headed to Martha’s Vineyard and a summer job in the fish market. The market’s owner and his wife provided her room and board and treated her as one of their own. It was a blast, meeting various celebrities and having James Taylor and Carly Simon as neighbors (as an aside, she adds, James Taylor’s mom made delicious smoked fish).

While winters in Florida were becoming a habit, after a particularly difficult personal spell C found herself back in Wisconsin. This time she enrolled in school for massage therapy while doing some catering. “Sometimes what seems like the worst thing that could possibly happen leads to the best,” she points out. “Becoming a massage therapist was the best thing that ever happened to me.” She took her new skill, which incidentally alleviated lifelong issues with arthritis, to Oahu.

But then just before her 40th birthday, C headed back to Green Bay because her mother was ill. This time, she met Ed Koconis, much younger than she and the night manager at a bowling alley. They became good friends, but when he suggested getting serious, she suggested he go see the world. Now when she returned to Hawaii, she had a “phone bestie.” Several years passed until she was in Wisconsin again. Ed paid her a visit. He had earned a master’s in planning, become executive administrator for Monroe County, FL, and was just then permitting the first spa at The Reef. Three months later, they were married.

As a therapist, C teaches people how to make themselves better via “C-isms,” like “Muscles are like men; they respond much better when they think it’s their idea,” and “Take a deep breath and hear your muscle say ‘I’m melting!’ then allow it to relax.” Her car boasts the bumper sticker “Visualize having a nice day.”

In this brave new world, C fills her days caring for maniac pups Ty and Miko and black cats Misty and Sinbad, gardening and providing virtual tours to friends of the orchids and gardens on their wooded double lot in Tavernier, cooking for neighbors, putting up pickles, and organizing books and other possessions that have finally come out of storage.

At the end of the day, it’s simple: “I like to grow things, cook things, and take care of Ed.”