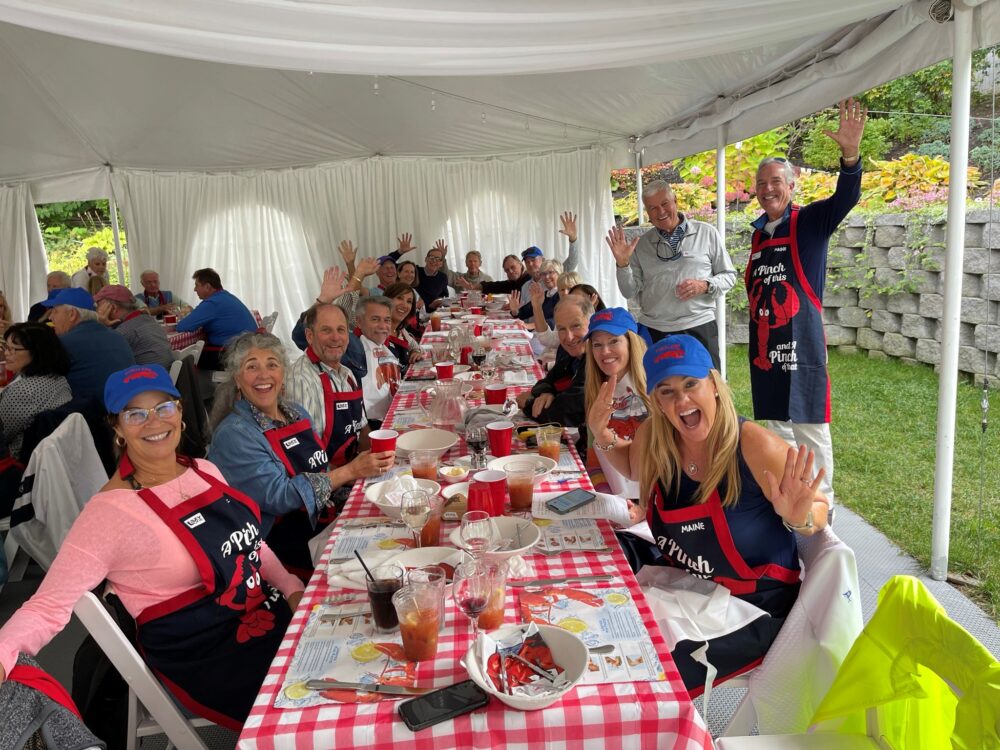 A table of delighted, apron clad, lobster-bake cruisers with claws in the air await their opportunity to savor their own locally caught lobsters at a famous Portland Harbor island feast.

In any other newspaper as dedicated to their readers’ activities and interests as the Ocean Reef Press, headlining and reporting a four-day local yacht club’s cruising event to a marine destination some 1800 miles away would create humorous disbelief. If it’s a well-known chore to fly that distance with golf clubs, consider that cruising 1800 miles in an average, small yacht that weighs well in excess of 10 tons, would require six days to comfortably carry four people that distance and would still have to return home after the four day event via the same route. Nevertheless, it happened in perfect fashion. Members, but not all, flew in from all over the United States to Portland, Maine; a few came by yachts. 160 delighted members attended.

The annual series of Fall cruises began when newlyelected, Commodore Steve and Joan Techet initiated, in 2006, the first “Fall Cruise” where members “cruised” to New York City. The popular, so called, “cruise” has been repeated annually to include world-wide destinations to which members could optionally cruise, drive or fly to interesting destinations over the 16 subsequent years.

ORYC members now had an opportunity to annually polish friendships dimmed by the Florida summer hiatus in a new destination. The sequential Annual Fall Cruises have included destinations such as San Francisco, Toronto, Chicago, London, Nashville and the length of the Mediterranean Sea; each depending on the inclinations and familiarity of the incoming Commodore team.

As the ORYC Commodore is elected annually in May, the Fall Cruise is usually the first event and test of a Commodore’s annual reign. 2021-2022 Commodore Tom Duderewicz and his wife, Susan, residents of Stafford, New Hampshire, chose Portland, Maine, only fifty miles from their New Hampshire home, as their 2021 Fall Cruise destination. Their excellent choice, the weather, the activities and attendance were outstanding. To be vividly remembered were antique schooner sailing, a lobster fest on one of Portland’s picturesque harbor islands, exceptional dining in Portland restaurants and the final gala party and dance.

Pictures tell some of the story of a polished cruise planned and beautifully executed by the Commodore Team of Tom and Susan Duderewicz and Phyllis Elden, the ORYC Secretary.

Featured above: With a fine sailing breeze and his members aboard, his burgee and flag flying above and his schooner captain behind him, ORYC Commodore Tom Duderewicz boards the larger of two outstandingly refurbished antique schooners chartered for the cruise of Casco Bay.