All,Clubs within the Club Something for Every Sailor ORC | March 13, 2020
ACCOUNT CALENDAR AND EVENTS CLUB LIFE QUICK LINKS

Promoting Sailing at Ocean Reef Something for Every Sailor

Sailors and boaters know and agree, Ocean Reef Club has a blessed location… 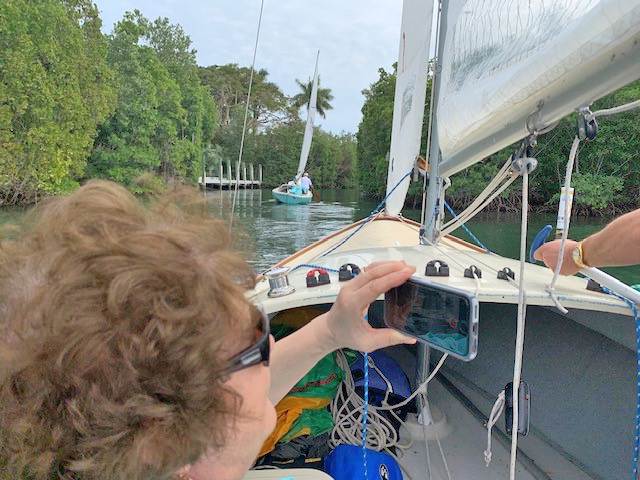 For winter-weary, relief-seekers from freezing cold fronts:
The extreme south-easterly location of Ocean Reef has provided the best protection from cold fronts in the United States.

For resident sailboat racers:
Ocean Reef Club has long had the well-organized, popular Card Sound Sailing Club dedicated to weekly racing the well-known, New England favorite, classic, youth and multigenerational teaching boat, the Herreshoff Bullseye. Racers compete in protected Gulf Stream warmed waters each week from November to April. Races are practically professionally managed. The Club hosts the US Bullseye Nationals once each five years that are popular with northern clubs. The Sailing Club also has a racing clinic program and operates and maintains the only property at Ocean Reef dedicated to the sailboat racers with a club-private boat harbor and meeting place. This weekly community newspaper dedicates at least one full page in each issue to sailboat racing.

For either internationally-oriented or relaxed, home-oriented cruising sailors:
Ocean Reef Club’s location at the northern end of the Florida Keys is unparalleled. The Club is situated only 60 miles from the Bahamas, and by extension, the Caribbean and South America. The Keys themselves are a 3500 square mile mecca of isolated keys, anchorages and, where populated, marinas and restaurants with docks. It is not uncommon to be anchored safely near an isolated key and still be less than five minutes by dingy to the dock of a 4-star restaurant.

When coupled with excellent fishing:
It is not a surprise to have a large number of Memberresident sail and power vessels docked at their homes or in Ocean Reef Club’s large marina-harbor. The United States Coast Guard Auxiliary supports an entire Flotilla unit at Ocean Reef that is voluntarily staffed by seasoned Ocean Reef Members to promote boating safety and rescue. Ocean Reef residents may also join a nationally recognized yacht club – the Ocean Reef Yacht Club – that is dedicated to cruising and international yachting comradeship. This club has residents who have sailed around the world or nearly everywhere in it.

Many existing members who had interest in sailing, boating, and fishing acquired before moving to Ocean Reef were well aware of Ocean Reef. When the opportunity was presented, they joined the Ocean Reef Club as Members.

However, and to the point of this article, for Members who now reside at Ocean Reef Club and, somehow, not a sailor or boater yet, the Club offers a personalized sailing instruction program using its own fleet of the friendly Bullseye that both teaches and promotes the joys of Ocean Reef sailing racing, and boating – expanding the Unique Way of Life from the plotted, land-based confines of Golf, Tennis, Pickleball or Croquet to the free, beautiful, bountiful adjoining waters of near and far horizons. These advantages can easily include you, starting your children early and potentially, your guests who would like to learn more about sailing and get a snapshot of the watery world surrounding Ocean Reef and the clubs and organizations that support it. It is just a telephone call away and you won’t get wet, won’t get a cold, but may catch sailing or boating fever – 305-367-5962 for the Buccaneer Island Pool Desk.