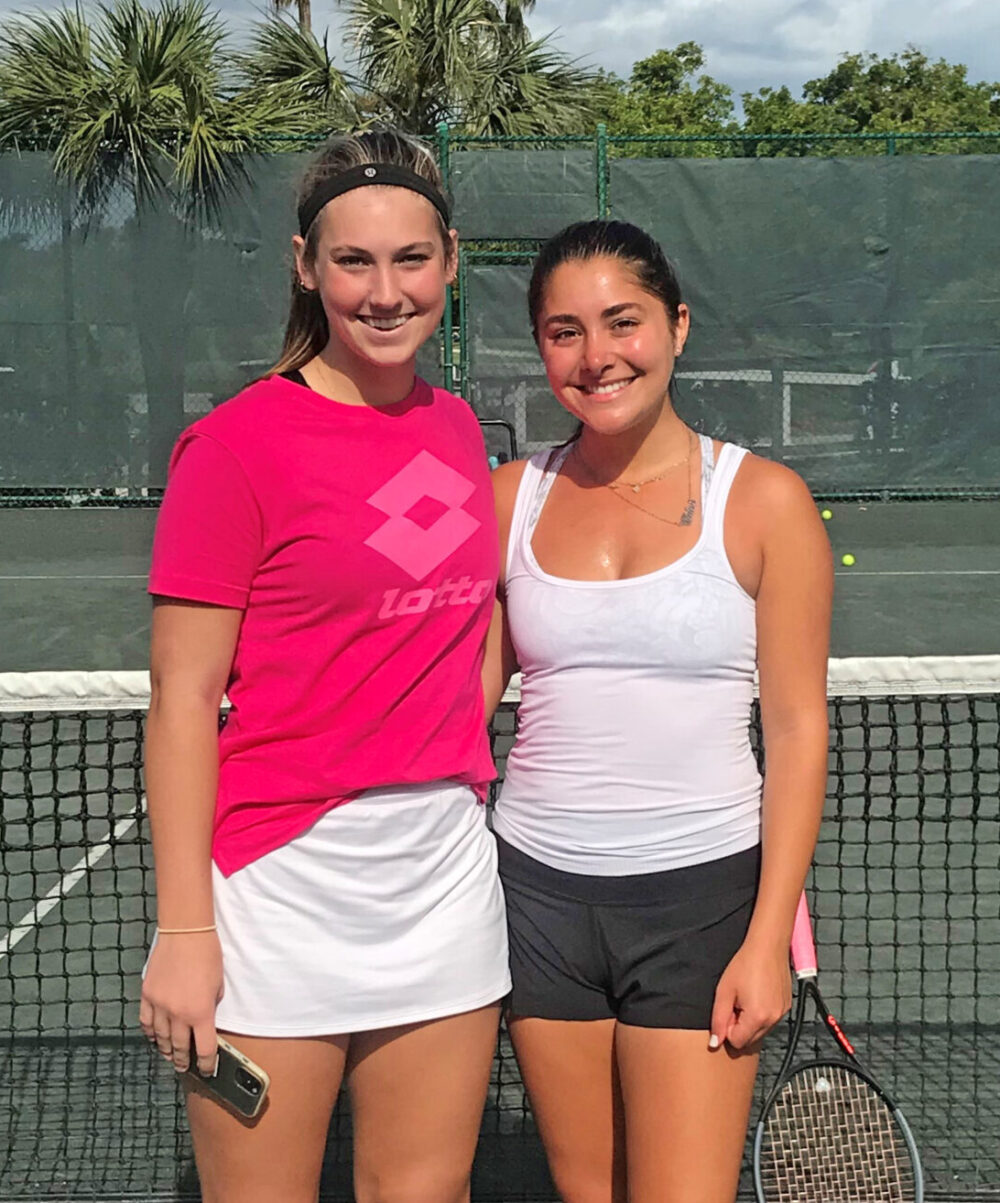 Two Legacy Members who recently met at Ocean Reef have one very exciting thing in common – next fall, they will both attend Bucknell University as members of the university’s Division One tennis team.

Whitney King and Chloe Zilkha have spent their entire lives coming to Ocean Reef with their families, but met only recently when Director of Tennis Jim Morton introduced them at the Tennis & Games Center.

“Over the years of playing with Whitney and Chloe when they visit Ocean Reef, I’ve had the pleasure of watching them grow into the great tennis players they now are,” said Morton. “I’m proud to see them fulfilling their dreams and representing Ocean Reef while doing so.”

Whitney, daughter of Amy and Keith King, begins her freshman year at Bucknell this fall where she will join Chloe on the tennis team. Whitney has been playing tennis since she was old enough to hold a racquet and says it was always a given that she would play the sport. Her parents both played in college and her dad even asked her mom to marry him on their high school tennis courts.

Whitney loves being at The Reef, able to hop in a golf cart and head to the courts every morning, followed with lunch at Buccaneer Island and the Fishing Village for dinner. She has a large extended family who all play tennis and in past years when they’d come to Ocean Reef for Christmas and New Year’s, Jim would run private clinics for the whole clan – aunts, uncles and all 17 cousins included. While playing tennis at The Reef has always been a shared family activity, pickleball has recently become their obsession.

“Every year, we play in the Christmas Family Pickleball Tournament, which is my favorite Ocean Reef event,” Whitney says. “We are quite obsessed to say the least. My family talks about it all year – some could even say we train for it.”

Despite the family’s affection for pickleball, tennis is still Whitney’s first love: “I fell in love with tennis because of the challenge. There’s always something to improve. When you play junior tennis competitively, there is no one cheering you on or coaching you and I love that it is all in your own hands. However, now that I am preparing to play on the collegiate level, I am beyond excited to be a part of a team and not just competing for myself.”

Growing up, Whitney and her father played tennis daily and she attributes this practice time to what helped her grow into the player she is today. Whitney says she’s delighted to enter her first year at Bucknell already knowing Chloe: “Meeting Chloe on a Zoom call last fall when I was still making my college decision made my choice to go to Bucknell so much easier. I am so excited I will have her as a teammate and it will be great to hit together when we are both on The Reef!”

Chloe, daughter of Gabrielle and Naz Zilkha, is a sophomore at Bucknell and has already been a member of the tennis team for a year and a half. She describes the small team of 10 girls as a tight-knit family and she’s looking forward to having Whitney become a part of that.

Like Whitney, Chloe and her family also love playing tennis and participating in tournaments at the Tennis & Games Center. Chloe and her mother even won the Mother- Daughter Tournament held this past December 26.

Despite her love for tennis, there may be something Chloe loves even more at The Reef, “My favorite thing about Ocean Reef is the food! I dream about the spicy tuna rolls and waffle fries. My family loves to fish and bring our fresh catches back to the Raw Bar for lunch or dinner.”

Chloe began playing tennis when she was four years old and played in her first USTA tournament at the age of nine. She says that from the moment she picked up her first racquet, she’s always loved the mental aspect of the game, as well as long rallies and the feeling of hitting the ball with good rhythm and perfect timing. She decided not to commit to a college program at the beginning of her senior year in high school, but soon after realized just how much she loved and missed the sport. When she committed to Bucknell, she immediately reached out to the coach and was able to walk on to the tennis team as a freshman.

While the Coronavirus put a damper on the team’s season this past year, they are looking forward to resuming competition this spring.

“Despite the virus, I have had an amazing experience so far,” says Chloe. “The team comradery is so strong and I’m excited to be able to call Whitney my teammate next year. In the meantime, we will just have to get together to play tennis at The Reef!”