Will you be at the 7th Annual Food & Wine Festival this year? If not, you’re missing out on a delicious celebration of all things culinary, from delectable dining to equally enticing wine and spirits and the opportunity to meet several acclaimed chefs.

Last week, we introduced Paula DaSilva – Carysfort Kitchen veteran and executive chef of The Ritz-Carlton, Fort Lauderdale. This week, we’d like to introduce you to the remaining lineup of culinary connoisseurs, Cindy Hutson and Lorena Garcia.

Cindy Hutson, executive chef/owner of Cindy Hutson Cuisine, began her professional culinary career in 1994 when she opened Norma’s on the Beach, touted as “the best Caribbean restaurant in South Florida.” Since then, Cindy and her life partner Delius Shirley have built a culinary empire, opening more than eight award winning concepts, including the 20-year-old Ortanique on Coral Gables’ Miracle Mile and four-year-old Zest in downtown Miami. Hutson has been recognized by USA Today, Esquire, Bon Appetit, Eater, and many more, and is also the celebrity chef/culinary ambassador for the Miami Cancer Institute. Her culinary style is culturally diverse and seasonally driven, influenced by her extensive travel and food history. Her self-coined approach to cooking, “Cuisine of the Sun,” means to “create without limits and cook everything under the sun.” 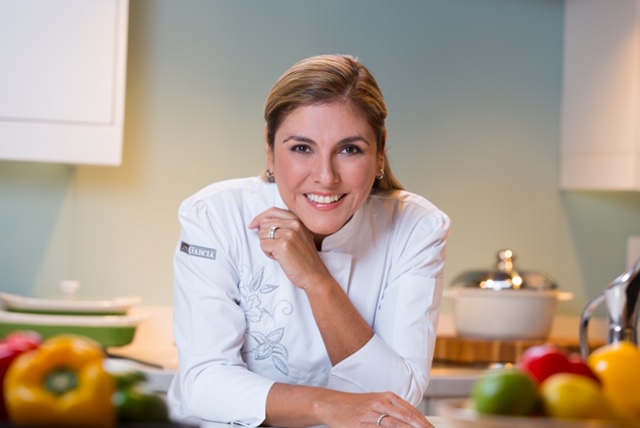 Lorena Garcia began her career as an apprentice at the Ritz in Paris and has worked her way to becoming one of the country’s top celebrity chefs. Garcia is best known for her appearances on Bravo’s “Top Chef Masters” and “Top Chef All-Stars,” NBC’s “The Biggest Loser,” “America’s Next Great Restaurant,” Univision’s “Despierta America,” and more. Her most ambitious restaurant project, CHICA at The Venetian on the Las Vegas Strip, showcases flavors and influences from Venezuela, Peru, Brazil, Argentina and Mexico. Her photo sits between world-class chefs Thomas Keller and Emeril Lagasse as the first woman chef on the “Wall of Culinary Titans” outside The Venetian. Late last year, Garcia opened CHICA’s second location in Miami’s MiMo district. Her take on Latin cuisine is a modern fusion of Latin ingredients and classic techniques.

See what these esteemed guest chefs will bring to the table, along with our Ocean Reef Culinary Team who will be serving some of their own specialties throughout the weekend. Don’t miss out on the host of activities, demonstrations and experiences the Food & Wine Festival offers.

On the Schedule
The Food & Wine Festival runs from Friday, April 24 to Sunday, April 26. A Welcome Lunch on the Town Hall Lawn will kick off the weekend, followed by a Sip & Shop at the Fishing Village and the Food & Wine Experience in Carysfort Hall. The following day begins with a Bloody Mary Bar on Tarpon Patio with Food and Spirit Demonstrations and Tastings at Carysfort Hall and the Town Hall Lawn throughout the day. Enjoy the Grand Dinner at Town Hall that evening with each course prepared by a different chef and expertly paired with wines from around the world. End a wonderful weekend with an extravagant Sunday brunch in Carysfort Hall.

Event passes are $550+ per person. For more information or to purchase your ticket, call Member Events at 305-367- 6526 or visit oceanreef.com/foodandwine.