For Mike Rich, the Reef Cup Invitational Sailfish Tournament is as much about friendship and camaraderie as it is sailfishing, so winning the 36th annual tournament with his crew of friends by his side was a true thrill. After three decades of fishing the Reef Cup Tournament without scoring the big win, Rich and his Business crew were elated to see their dedication lead to the coveted championship.

“While I was aboard Anthracite for their 1992 Reef Cup win, my crew and I have been fishing on Business for many years without finishing in first place,” said Rich. “As a team, we’ve been waiting for this win for a long time and it’s gratifying to be able to call ourselves 2021 Reef Cup Champions.”

Rich credits his great crew – Dave Johnson, Ralph Lopez, Scott Parker, Calvin Stoudt, Captain Dave Goddard, and Mate CJ Janiszewski – for their success this year, and said he’s especially excited for his captain, Goddard, who’s been fishing the Reef Cup with him for more than 22 years. 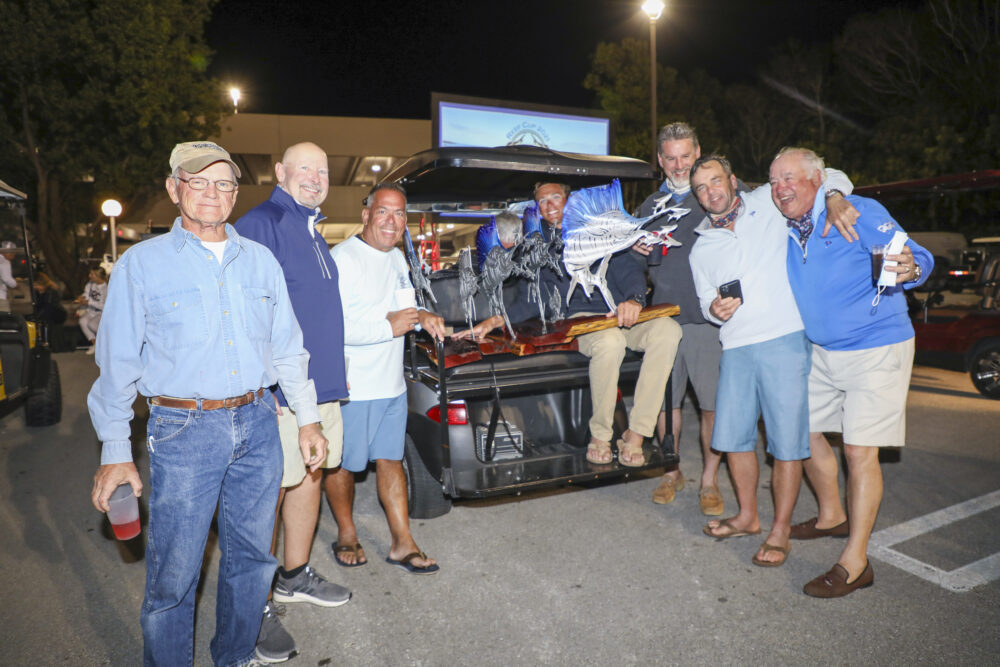 Business Takes an Early Lead
Twenty-eight teams, just over half of the 51-boat fleet, braved the high winds on Thursday, January 28 for Day One of the tournament. Business had a strong start early on, catching and releasing their first sailfish at 9:04 a.m., courtesy of Mike Rich, with two more catches by Ralph Lopez and Rich at 11:03 and 11:43 a.m. respectively. The team’s three catches propelled Business to the top of the leaderboard at Day One’s end, a spot where they’d stay for the remainder of the tournament.

The windy conditions accompanied by a drop in temperature continued into Day Two. Twenty-two teams, Business included, decided this would be their Lay Day – a shrewd choice as the day saw a mere 16 catches. At 4 p.m. on Friday, the Menten family’s Pisces V was declared the Day Two winner with 200 points.

Day Three of the tournament, totaling 25 catches, was where the excitement truly ramped up. Although Business was in the lead with three Day One releases, their confidence waned as they watched other teams climb up the day’s leaderboard.

“We came into the third day in the top spot, but we witnessed Ken Karl’s Mollie K catch a triple right in front of us before we even caught our first fish of the day,” said Rich. “When we did finally catch our first at 11:55 a.m., we realized we were in a great position, two fish ahead of every other team. Although our confidence was growing, we still knew anything could happen over the next four hours.”

Mollie K and Bill Johnston’s Wing Man would both end Day Three with 300 points and in first and second place respectively, but it was not enough to surpass Business in the overall standings. With only seven minutes to go before 4 p.m. lines out, Mike Rich hooked a sail at 3:53 p.m., followed by another only minutes after hooked by Scott Parker at 3:57 p.m.

According to Rich, cold fronts usually bring in more sailfish, but that didn’t seem to be the case this year. While the front didn’t help the overall sailfish count, which reached just 65 (not quite the lowest, which was 26 in 1989, but still a far cry from the highest, which was 507 in 2009), it did seem to work in Business’s favor. Their tournament total of six sailfish was twice the number caught by the second and third place teams – Kevin Fish’s Sandrita and Michael Waite’s OHHH Boy each had three releases.

Rich, who is a member of the Reef Cup Committee, said this tournament is a tradition he looks forward to each year. “I love fishing at Ocean Reef, it’s a boater’s paradise, and I never miss an opportunity to participate in a tournament. I want to say thank you to everyone involved in Reef Cup, including Kyle Landers, Director of Member Events, and his team. The Business crew is already looking forward to seeing what next year’s tournament holds and we’re hoping it’s even more sailfish!”