As previously mentioned, back in the late 1960’s, the development of Ocean Reef Club was envisioned by Harper Sibley to be in four phases. Phase I was the Harbor Course area, Phase II was the development of what is now the Fisherman’s Cove area and Phase IV was the Snapper Point single family area. 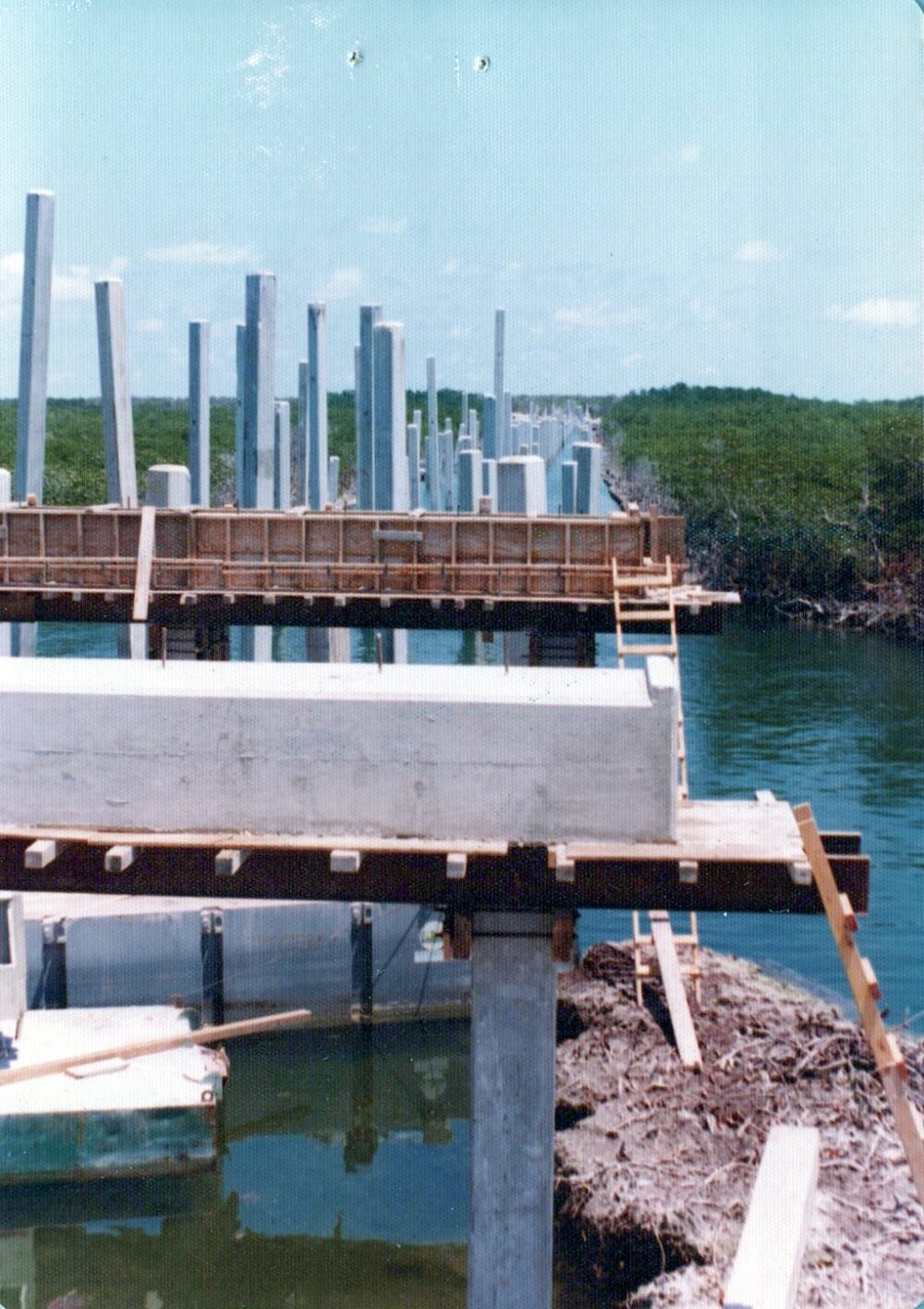 View of the Sunrise Cay Bridge during construction, 1976.

Phase III was all about the development of multi-family housing in an area of scrub land then called Angelfish Key and now called Sunrise Cay. The original county and state approved plan permitted construction of 650 housing units plus a long bridge to permit access. The bridge would extend nearly one half mile and span Pumpkin Creek, Little Pumpkin Creek and dense mangroves. The bridge was to be built above the level of the mangroves and had to provide thirty feet of clearance over Pumpkin Creek to allow for boat traffic underneath. The permit also stipulated that encroachment into the mangroves could not exceed 18 inches from each side of the bridge. Many thought this requirement would be impossible to meet which may have been why the permit was originally granted. In addition, the permit for the bridge had a fast approaching expiry date and immediate action was urgent.

The proposed bridge became known as ‘the bridge to nowhere’ and who could or would build such a bridge with these severe restrictions? The Club needed the potential revenues from the development of the housing.

The history of our Ocean Reef Club has an underlying thread that weaves through the difficult times. That thread is the benevolence of members. We saw it with the ‘Fearless Five’ and we’ll see it again and again. This time it was the late Steve Torcise, a long time Club supporter and member, who owned and operated Florida Rock and Sand Co., a mining, redi-mix and heavy highway construction company. Always up for a challenge, the first thing Steve did was to bring on what was called a ‘mud-cat’, a machine on pontoons with a large circular saw that cut the boundaries of the mangroves and the muck below exactly to the permit specified width. The ‘mud-cat’ enabled workers to cut a clean line through the mangroves without encroaching on the other side which was not permitted. The mud-cat was also fast and saved a lot of time. Once the clearing was underway, the concrete piling (manufactured by Florida Rock and Sand as well) were driven and bridge caps were poured. These were set with a large barge and crane working backwards west to east towards Sunrise Cay. Trailer after trailer brought piling and decking sequenced for a fast approaching deadline. Following behind were barrier wall construction, utility installation and finally asphalt. Once the decks were set, much of the construction was accomplished from the bridge. Trucks and construction equipment never encroached the environmentally sensitive land designated to be preserved by the permits.

Of course, as usual, the big problem was financing the bridge, which at the time was thought to be the longest privately owned bridge in the world. The Club had exhausted all avenues for further credit, so they decided to fund it out of cash flow. Again, Steve Torcise allowed this to happen sometimes waiting as much as five months for progress payments.

The finished bridge provided access for construction equipment to build roads and dig canals and Sunrise Cay started to look like it does today. Of note, as you go over the bridge the area between Little Pumpkin Creek and Osprey Lane was particularly low and needed fill. The Club used everything they could find to increase the height and there are rumors even some old cars are buried there…just rumors, though.

The demand for multi-family housing gave way to the demand for single family lots, and instead of 650 units, Sunrise was divided into 80 lots which was strongly encouraged by another longtime faithful member, Bill Berkley. Stay tuned for more about Mr. Berkley and other benevolent members as we learn about the how our Club came to be the magnificent, one of a kind, community it is today.