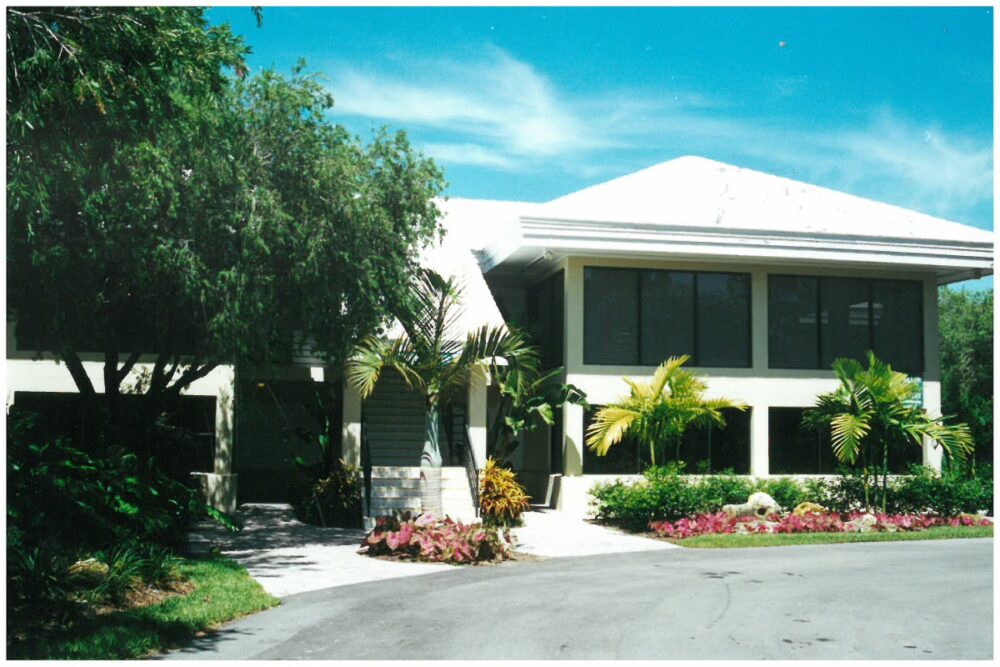 The Harbor Club as photographed in the late 1980’s.

As previously mentioned, back in the early ’70’s, the Club entered into an agreement with Driscoll Properties and a small group of Club members known as the ‘Fearless Five’ to acquire land outside our then existing front gate for the purpose of building another golf course which would be named Harbor Course. This agreement outlined certain conditions specifically between the Club and Driscoll Properties that included the sale of lots and the construction of a clubhouse.

At that time, the Club’s property extended south up to hole #5 on the Hammock Course including lots on Dispatch Creek Dr. South Harbor Drive, Dilly Tree, North Bridge and Caloosa Road. Hole #5 and everything south belonged to Driscoll. The agreement provided that the Club act as the seller of these lots receiving sales commissions and controlling memberships which provided much needed revenue. At the same time, the Club would sell its own lots on properties between #5 and the front gate. All of these lots’ value would be significantly increased by the construction of the golf course.

The clubhouse would contain a pro-shop, restaurant and snack bar and be constructed across South Harbor Drive and the first hole (now #5). One of the covenants of the agreement stipulated that the pro shop for the Harbor Course would always be in this clubhouse. Architect Chris Fergus designed and Seaboard Construction built the facility at a cost of $1.6 million. Two tennis courts were installed approximately where the pool and ORCAT is today. The intent was to make this area, called Harbor Course Club, a focal point to enhance lot sales.

The restaurant was located on the upper floor of the clubhouse and was equipped with a full kitchen. To recoup some of the cost of the building, the developer began to sell equity memberships for $5000 each that also included a 50% discount on Ocean Reef golf passes. The food was very well received and the service was impeccable. (One member chronicled his napkin would be neatly refolded at his table every time he returned from dancing.) Demand for memberships sky-rocketed to well over three hundred. On one end of the restaurant was a piano bar where the then very popular Nino Lanny would play favorites until the wee hours of the morning. New Year’s, Valentine Day, St. Patrick’s Day parties (or any excuse to have one) all quickly sold out much to the enjoyment of the Harbor Club members. Times were good and everybody in Happy Valley was happy.

Gradually, however, the Harbor Course began to lose popularity. The manager, John Langley, was killed in a car accident and subsequent poor management started to turn members to other improved venues offered by Ocean Reef and Angler’s Club.

But wait a minute. After Ocean Reef Club members bought the Club from American Financial and became private, a new clubhouse was constructed near #1 at Dolphin and Ocean Reef Club received a formal letter from Driscoll Properties effectively stating the Club was in violation of the original agreement which stipulated no other Clubhouse could have the Harbor Course pro-shop. Heated conversations ensued. Would cooler heads prevail? Stay tuned.