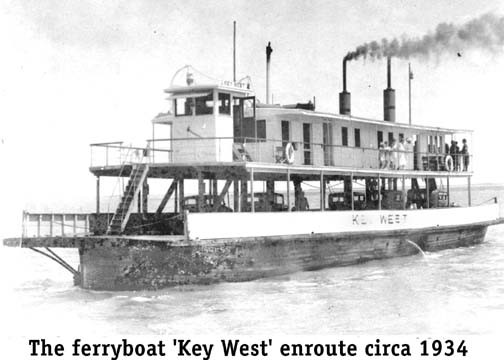 A brisk breeze threatened to blow off the hats of Joe McDonald and Frank Stoneman as they snipped the ribbon on the 2,800 foot Card Sound bridge opening the first road access to the Keys from the South Florida mainland. It was January 25, 1928. The bridge was made of wood and employed a mechanical section in the middle that swung to the side to allow for boat traffic.

Stoneman, the first editor of the Miami Herald, whose daughter was Marjory Stoneman Douglas, and McDonald, who was Henry Flagler’s right hand man, were original members of the Miami Club, a group of businessmen whose purpose was to promote Miami as a business location and also as a tourist destination. The bridge would give access to fertile fishing and recreational areas and further the desirability of living in South Florida. (Effectively, they were a modern Chamber of Commerce). Prior to this bridge, automotive access was primarily by ferry.

This bridge was not the first attempt, however, because the original bridge was started in 1920 and when it was very nearly completed in 1926, a major hurricane called ‘The Great Miami Hurricane’ seriously damaged the low-slung structure which had only a five foot clearance over the water. The new design featured a nine-foot clearance and proved effective for the next 20 years. 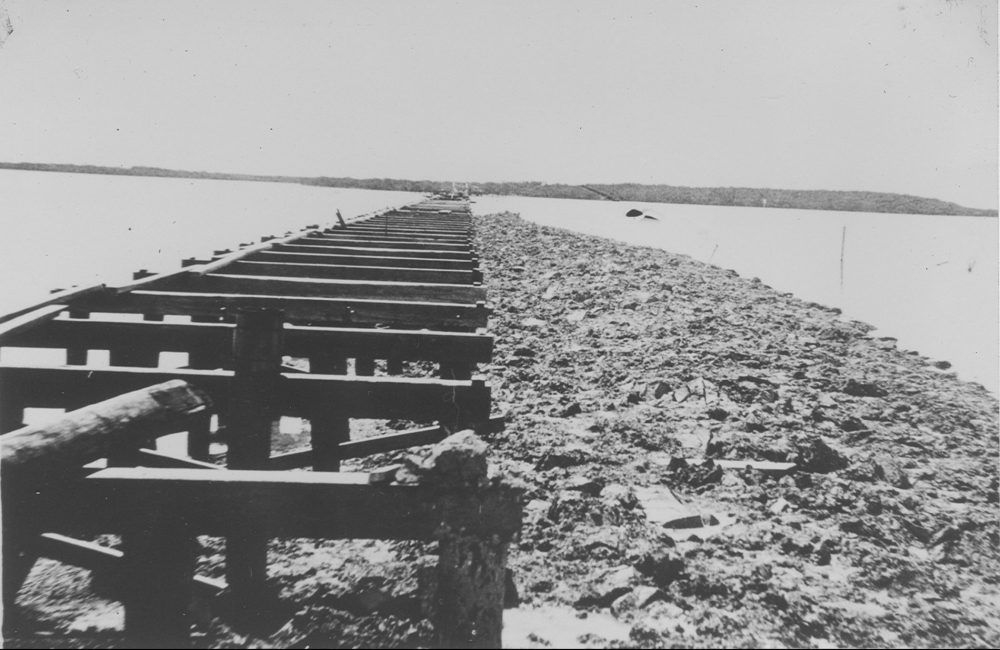 Looking back towards Dade County, this photo is of the causeway
under repaired from damages due to the 1926 Hurricane.

During the 1940’s the importance of the bridge began to diminish. In 1941, a pipeline was installed along the old Flagler railroad right-of-way to assure good water supply to the Naval Base in Key West. A new road was constructed the next year over this same right-of-way and US1 was rerouted causing the usage of the Card Sound bridge to drop dramatically. The wooden bridge had become oil soaked through the years and in 1944 fire caused considerable damage compounded by a 1947 hurricane. In 1947, the Bridge was closed permanently and partially removed as were the other bridges across Steamboat, Tubby’s and Mosquito Creeks. If you navigate through Steamboat Creek between Barnes Sound and Card Sound, evidence of the old bridge still exists (beware).

In the ensuing years, several different ideas for another bridge were formulated. The southernmost point of the mainland of the United States is Cape Sable and one proposal was to build a 22 mile bridge connecting Cape Sable to No Name Key just west of Marathon. The creation of the Everglades National Park nixed the idea. Then a monorail concept from Miami through Cape Sable to Key West met the same demise. Possibly the most interesting proposal was to connect Biscayne Bay to Northern Key Largo through Elliott Key. The plan was called ‘Islandia’ and named after a small community then on Elliott Key. After moving the land demarcation point near Turkey Point, this plan failed – partially because Monroe and Dade counties could not agree on the sharing of toll revenues.

One part of the ‘Islandia’ plan survived, the 65-foot causeway over Card Sound we now enjoy. The Capeletti Brothers, Inc. completed the work for $1.95 million and bridge tolls were collected to repay the bonds. Opened for traffic in 1969, the graceful bridge is crossed by more than 3,500 vehicles per day.